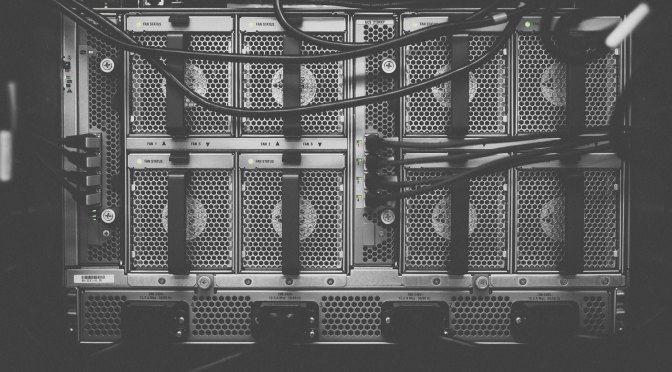 In the days when 100MB drives were the norm and Microsoft Office came on 43 floppy disks, in the process of formatting a floppy disk I somehow managed to format my work hard drive.  Computers were single drives then so I lost all of my data and operating system too.

Since then I keep copies of all my important data on USB drives which I keep in work, and bring home monthly to update, the process is described here.  Ideally I’d have to two sets of drives so that the data and backups are never in the same location – I’ll get to that someday.  So for now the backup consists of two drives which are roughly 4TB in total.

4TB might sound like a lot but I have a lot of photos, music and videos to backup.  Using a Canon DSLR regularly along with a GoPro style helmet cam means the storage of photos and music grows rapidly.

This is a breakdown of my usage as of today: 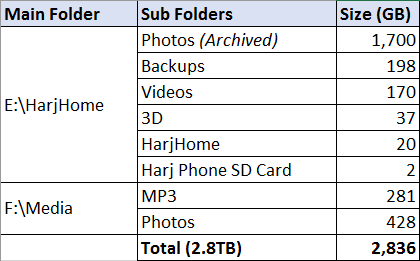 After a bit of research online I came up with options Backblaze or CrashPlan – they are both reasonably priced and have good reviews.  Unfortunately, CrashPlan was putting an end to the Home Service,  I’m assuming it wasn’t profitable enough for them.

This left me with Backblaze.  It sounded very good, $5 a month for 1 computer – unlimited backup sizes, unlimited file sizes, and backups of external drives.

I signed up for a 30 day trial, and installed the PC client.  The first thing that surprised me was that you can’t easily choose what to backup.  By default it backs up everything, even your OS drive.  The reason they give for is is that most users don’t want to decide what to backup!  I had several very big folders on my drives which I didn’t want backed up, and managed to exclude them (though exclusion folder names apply to all drives).

After a few days it had only backed up about 10GB, which was a long way to go to get to a complete full backup set.  I wondered whether it was because my PC was connected to the ISP router over a wireless connection.  A connection speed test using a wireless connection and wired connection using a laptop came back with the same results – my upload speed was 10Mbps.

Checking the Backblaze client indicated that it was using all the bandwidth available to it, and backing up around 2GB per hour.  Now, my PC is only switched on when I’m using it.  A few years ago it would be switched on 24/7 when I was doing 3D rendering but I don’t do that any more.

So my first backup wouldn’t complete for 40 weeks!  And this isn’t including the files that get added during that time.  It’s at this point I decided it wasn’t the right time to move online.  The way internet speeds are increasing I’ll have a much quicker upload in the future, and it may be worth paying extra for more bandwidth.

And that’s why I don’t use online backups. 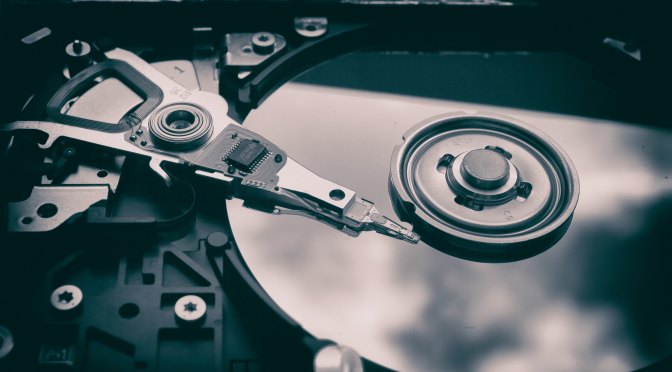 This lifehacker post discusses average life times for hard drives, and the average times are between a few months and five years.  I backup all important data to 2 external USB drives.  I’ll describe the process I use for each backup drive below.

First of all I put a file in the root directory of all the drives (main and backup) so that the backup procedure can test for the existence of drives before running.  The file format I use is Backup-E.TXT where E is the drive letter.

Secondly I create a batch file which does the copying process for each backup drive. 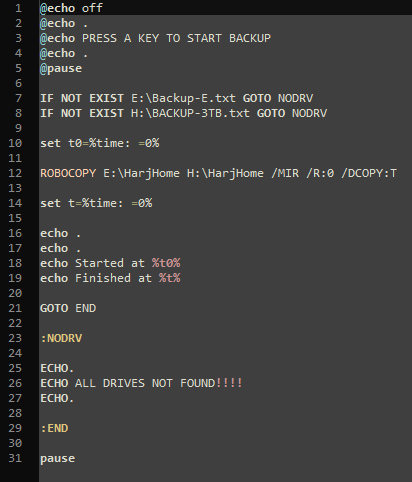 Lines 7-8 check for the existence of the main and backup drives, and if not found will jump to Line 23 and no backup will occur.
Line 23 is the command that actually backs up the data using the excellent Robocopy which can be installed from Microsoft Technet.  It only copies updated files so the whole process is much quicker than copying the full data again.

If the backup runs successfully it will show the Start and Finish times so that you can see how long the backup took.  I normally start it and leave it for an hour or two.

And there we have it, all data backed up.  Don’t forget to take the drives to an offsite location.  I keep mine at my work office but it could be a family members or friends house.